haven't been this drunk in awhile. not quite sure how i got home but here i am!

pics to come tomorrow when i can coordinate better...

a mini reunion was had because sri's in town!

i was pretty beat and wasn't up for much, but i'm glad i went. :) it was a blast and a half, and i caught up with some peeps whom i haven't seen in ages.

the night started off @ cuscaden, in this little beer garden thingy at the bottom of some stairs. a pretty chill place, no airs, no posers (except us posing for photos...).

sri amazed us with his ability to take a group photo with his arm extended and pointed back at us all, himself included. it was a great pic too! his camera had a swivel preview screen, so that helped. cheryl's camera had a pointer light, so that helped too. mass-peeps pics with these cameras were snapped without major glitches, but unfortunately, my camera had none of the above, which resulted in a veered-left photo. thus, a kind soul had to be roped in to snap the group pic for us with my camera. 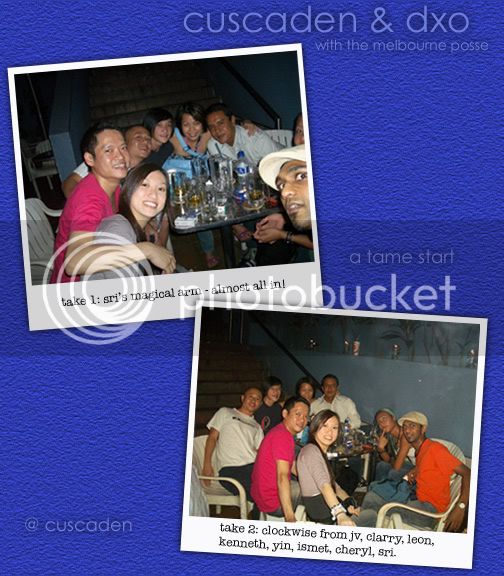 after quiet beers and chitchat, we moved on to dxo next to the esplanade. quiet beers made way for noisy champers... 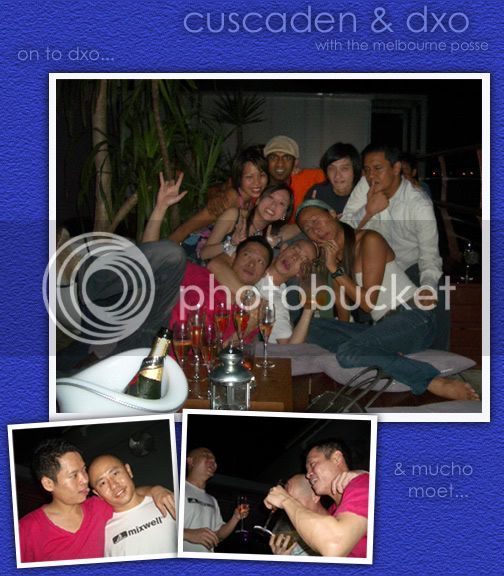 the roof deck of this place rocks. a much better place than embassy, i reckon. a tad hot, but i guess it might be because we all had a tad much to drink. still, they oughta look into getting some air-cooler action happening up there.

ran into muhammad, and dezzo!

sure was good to see everyone. sri's heading back to france on monday... all the best dude! :)

with the work crew last wed, a night out on the bosses. :)

then everyone was served a lobster pasta before their choice of mains. the baby lobster was aesthetically pleasing, but a little tough. pasta sauce was excellent though.

by then, most of us were stuffed. ok, so i stuffed my face with parma ham right from the start. :P

laura wanted the mushrooms and mash that came with the lamb chops but doesn't like lamb. i was wanting the foie gras that came with the beef steak... and didn't mind having lamb. so we struck a deal. we ordered one of each, and swopped the meat.

the foie gras rocked. the lamb wasn't the best i've had. it wasn't quite tender enough, although it was a generous cut. the lamby taste wasn't very well complemented as well. laura's beef was not too bad, albeit a little dry. synn's cod fish was the best of the lot. belinda ordered some kinda fish... was it the monkfish? the seasoning of the fish was quite tasty, though the texture of the fish coulda been better. most of the fish went to daniel... as did most of my lamb chops and some of laura's beef.

perhaps i was already quite stuffed, so my taste buds were harder to please. :)

the sorbets were quite refreshing after so much heavy-eating. ice cream scoops were quite nice too. there was a rather interesting pistachio flavour.

we had a ball with the champers and wine... lots of toasting and blabbering. t'was good fun. :)

thanks bosses! we gotta do this again. ;)
Collapse